iOS 11 is the popular topic these days. For most iOS device users would choose to update their iPhone to iOS 11. But if you only have iPad and also want to experience the new iOS 11, you could choose to update the iPad as well. Some users may be disoriented by the update as Apple has completlely changed the user experience with a big empgasis on Split View and Slide Over. Below we will give you some instruction about how to use iOS 11 on iPad.


The first thing you're going to notice when you install iOS 11 on iPad is that the bottom row on your screen has been replaced by a macOS-like dock. You can put a dozen apps in that dock, and you can pull up that dock by swiping your finger from the bottom edge of the screen. It works even if you're using an app already. You can tap on an app icon and drag it on the side of the screen to open a narrow version of it. It works just like Slide Over in iOS 9 and iOS 10, but with a new presentation. Moreover, if you need to use two apps at the same time, you can still open both of them using the split view. You can easily replace one of the apps by dragging an icon from the dock and dropping it on one side of the screen.


How to Use Multitasking in iOS 11 on iPad


Multitasking isn't a new idea for the iPad, but its execution here is a leap forward. This is not only the iPad at its best but Apple at its best. The new multitasking view is brilliant, showing a grid of windows rather than being wasteful of the iPad's screen real estate as with iOS 9. It also shows Control Center here automatically and the new dock. It remembers how you group apps together and lets you switch between different spaces. For instance, if you have Mail, Word open, and switch to Safari, you can jump back and those apps are still side-by-side.


Drag and drop is a new feature coming to iPhone and iPad iOS 11 and looks to improve upon what has been available on PC and Mac for decades. It's very easy to do, you simply press and hold on an item you want to drag, and it's then pinned to your finger. From there, simply swipe across the display with your other hand and drop the item where you want. On an iPad, you can drag and drop items between apps or even drag and drop apps themselves, and much more. You can also use iOS 11 drag and drop technology to organize your Home screen, a task that for years has been difficult.


How to Custom Dock iOS 11 on iPad

iOS 11 presents a new Dock. This new Dock changes your iPad into something significantly more beneficial and a hell of significantly more easy to understand. It's accessible on your iPad from any screen, in both portrait and landscape mode. This new Dock is completely redone. Adding your most loved applications is easy – just tap that application and drag into your Dock. You can even add files to the Dock – just drag a file down similarly as an application. With files, you get to a group of applications, all through your Dock without taking excessively Dock space! If you need to remove an application from your Dock, that's simple as well! Simply tap it, drag it, and drop it into your new area or folder.

Open the "Settings" app on iPad and go to "General" section.

Flip the switch next to "Allow Multiple Apps" to the OFF position.

Exit the Settings app as usual by pressing the Home button. 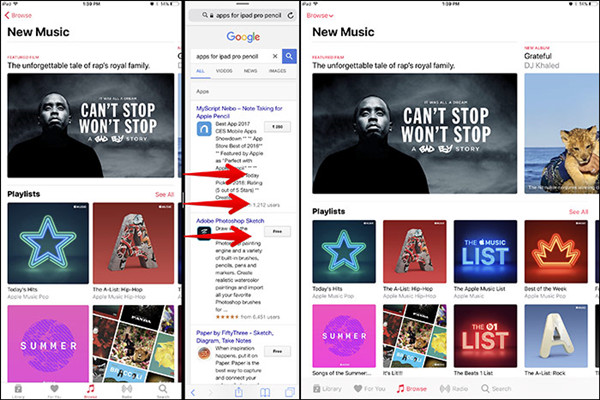 With "Allow Multiple Apps" disabled, you will never again approach the sidebar Slide Over component regardless of how often you swipe from the side of the iPad show.

It's hard to cover everything about how to use iOS 11 in just one post as your experience with this update is going to amaze you if you're using an iPad. On the iPad iOS 11 feels like a brand new operating system. iOS 11 is the update that the iPad has been waiting for. Though the new multitasking features along with drag and drop won't mark out the iPad as a laptop replacement for all, it will surely make it a much more feasible alternative.

iPhone Contacts Missing Names Tips for Unable to Check for Update When Upgrading to iOS 12 Tips to Fix iPhone 8 Screen Stays On (iOS 11.4 Supported) How to Reset iCloud Password on iPhone/iPad Solutions for Unable to Complete Touch ID Setup Tips for Email Push Notification Not Working in iOS 11.4 Apple ID is Disabled? Here is the Solution How to Make Text Messages and iMessages Private on iPhone How to Move WhatsApp Media to SD Card How to Reduce iPhone Video Storage